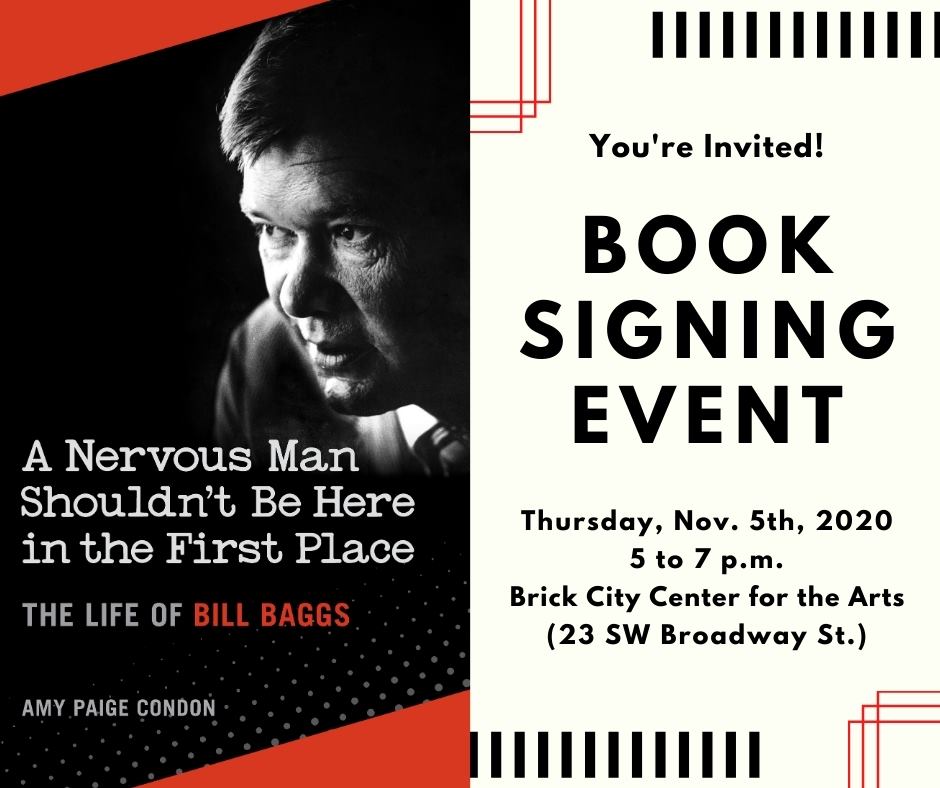 The Marion Cultural Alliance, together with Craig and Mary Baggs, cordially invite you to a book signing to celebrate the release of “A Nervous Man Shouldn’t Be Here: The Life of Bill Baggs,” Nov. 5, 5-7 p.m., at the Brick City Center for the Arts.

In this first biography of one of the 20th century’s most influential editors, author Amy Paige Condon traces how an orphaned boy from Colquitt, Georgia, traveled the world, fought for freedom, landed in Miami, and led the Miami News to three Pulitzer Prizes – all while leading on civil rights, Latin American diplomacy, the Cuban Missile Crisis, environmental and historic preservation, and peace in Vietnam. Along the way, he befriended everyone from an elderly man born into slavery to a farmer in Panama to U.S. presidents from Harry S Truman to John F. Kennedy.

It’s an extraordinary, yet intimate story of one man’s impact on the world we still live in. As Bill’s son Craig Baggs can attest, Bill’s brief life offers lessons that resonate today and reminds us of the necessity of an independent local press to democracy.

About the Presenters:
CRAIG BAGGS
Craig Baggs—the son of two Georgia peaches, Bill and Frec Baggs—grew up in the strange alchemy of journalism and politics that swirled in midcentury Miami. He attended his first national political conventions at age six, and by the age of eleven, found himself standing in the Oval Office with his father, the editor of the Miami News, being introduced to Supreme Court Justice Earl Warren.
Craig studied the great books at St. John’s College in Santa Fe, New Mexico, and later received his B.A. in international affairs at Florida State University in Tallahassee, where he also worked on a master’s degree in communications. Baggs and his wife Mary, have raised their three children in Ocala and have both just recently retired from careers in sales and marketing in the newspaper, healthcare and insurance industries.
Baggs is a member of the Marion Cultural Alliance, a reading pal for the United Way of Marion County, a member of the Friends of Silver Springs State Park, board member at Interfaith Emergency Services and member of Grace Episcopal Church. He enjoys time at the family getaway on coastal Georgia, gardening at his beloved home “Kingfish Corner,” and growing up once again with his six grandchildren and grand dog Mack, who like Craig, is a southern gentleman.

AMY PAIGE CONDON
Born to a whisk-wielding cake baker and a tequila-swilling gentleman, Amy Paige Condon was reared in Fort Worth, Texas. She traveled to Miami, Florida, for what she thought would be a one-year internship in the Miami-Dade County manager’s office, and ended up staying for 16 years, finding an accidental career as a park planner – a profession she fell in love with until her first love, writing, kept calling her back.

She and her husband sold everything and moved to Savannah, Georgia, where Amy earned a master’s degree in writing. While still a graduate student, she co-authored the New York Times bestselling The Back in the Day Bakery Cookbook (2012, Artisan) with baker-owners Cheryl and Griffith Day. Her master’s thesis became the basis for the Wiley’s Championship BBQ Cookbook (Gibbs Smith 2014), which was named the best cookbook of the year by the National Barbecue News.
She was editor of the award-winning Savannah magazine, and in 2017 opened the Refinery Writing Studio, where she teaches creative writing classes. She lives in Savannah, Georgia, with her husband, three mutts, and a talkative pig named Gus.

Social distancing enforced with 45 max capacity and masks required while inside the gallery.